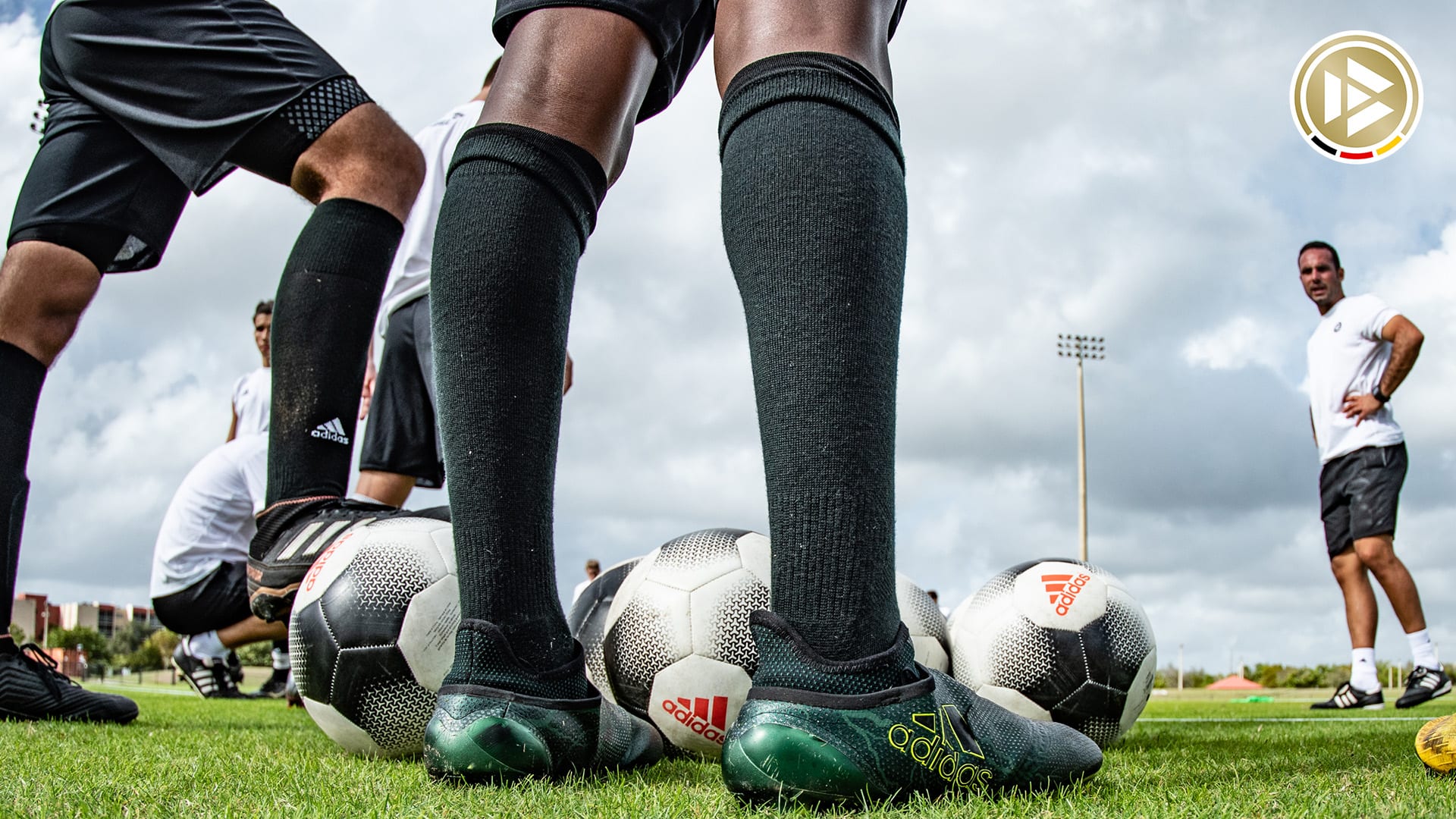 Just over two months have passed since the DFB-Akademie held its first youth soccer camp in the United States in cooperation with WARUBI Sports. A camp that took a lot of discussions, planning, and networking beforehand but was worth it every minute. Exhausted smiling faces and positive feedback from campers and their families all around. Convince yourself and check out the photo gallery.

As official partner of the DFB-Akademie for youth soccer camps in the U.S. we are excited to work on several camps around America for 2019. The next one will be in Fort Lauderdale, Florida on July 1 – 3. If you are interested, you can find more information about the further improved DFB-Akademie Training Centers here – all levels, all ages, same location!

The German Football Association interviewed the driving forces behind this project. Alexander Nouri, former Bundesliga Head Coach at Werder Bremen, and Nicolas Jungkind, Managing Director of the German Soccer National Team. Keep on reading to learn more about the insights of the camp and the idea behind the DFB-Akademie project in the United States.

NOURI: “EXTREMELY POSITIVE RESPONSE TO THE US SOCCER CAMP”

He demonstrates the drills to the children on a tablet, giving useful tips on the game and still gives a lot of time for feedback after the training sessions. Alexander Nouri is really glad to be working on the football pitch. The 39-year-old is currently overseeing the first Soccer Camp for the DFB Academy in the USA. 36 children are taking part in the camp in Fort Lauderdale, Florida, in order to improve their footballing skills using the DFB training guidelines. Managers Alexander Nouri (most recently of Werder Bremen and FC Ingolstadt) and Nicolas Jungkind (who works for the DFB Academy in the USA) spoke about unity, experiences and gave some insight into the camp.

DFB.de: Mr. Nouri, for the first time, the DFB Academy has organised a Youth Elite Camp abroad. How are you finding taking charge of the camp?

Alexander Nouri: It’s been great fun to co-design and take part in a project like this right from the start. The DFB Academy has been active in the USA for some time and has been looking for a partner for the planning and implementation in the US market. Nicolas Jungkind and I had very promising discussions from the beginning. We’ve been planning the first one for months, and I’m glad that I decided to do it.

DFB.de: Mr Jungkind, how did the collaboration with Alexander Nouri come about?

Nicolas Jungkind: I got to know Alex preparing for a seminar trip to the West Coast. He played for Seattle Sounders in 1999 and his contacts were very helpful. We met up again in Frankfurt and Alex told me about his idea to set up a project for a football camp in the USA. The idea fit perfectly with our academy plans for the USA and we took the idea forward together.

DFB.de: What’s the significance of the first camp for the DFB Academy in the USA?

Jungkind: It has a lot of significance. What we’re doing is very high-quality, and it’s taking place directly in the USA with the academy. Alex Nouri is a very important partner for us, and he brings a high level of football management skills, has an excellent relationship with the young people, and he speaks English fluently. We’re also very pleased that we’re working with our partner, Adidas, abroad.

DFB.de: The camp was aimed at football-loving, talented children from the USA. What’s on the training schedule?

Nouri: It’s a concept that I developed with Thorsten Fluck, closely following the guidelines of the DFB. Through different types of drills, we give the children and teenagers an introduction to defensive and offensive principles. After two days of training, focus is put on switching play and applying their skills practically. Above all, it’s important that the children learn the key points through playing. At the centre of it, this means that the game is still the best way to get feedback!

DFB.de: What can the children take away from the camp?

Jungkind: The aim is to give the kids that take part an insight into the German philosophy and get them to learn something both footballing-wise, and for themselves personally. We made sure that we signed very talented footballers in the recruitment for the camp. Therefore, Alex and his team were able to get the information across at a very high level.

Nouri: Having two coaches for every 12 children allowed us to give quite detailed coaching and individually evaluate the children at the end of the camp. At the end, each participant received a personal evaluation with coaching tips. At the beginning, we gave each child a ‘playbook’ in which all the drills are outlined. They could make their own personal notes and create their own ideas with our coaching tips.

DFB.de: We noticed that modern technology was always being used, particularly on the pitch.

Nouri: We worked with our self-developed training app. The entire bank of drills and tactics are stored in there in the form of sketches and animations. We showed the participants each drill on a tablet beforehand. The process of it was very clear to them quite quickly, so we could immediately go into more depth. Afterwards, we reflected on the learning objectives with the group again.

DFB.de: How did the participants respond?

Nouri: The response from the children and parents was extremely positive. Our local partner, (WARUBI-Sports) emphasised both the content and the well-structed organisation. As the world is so connected through social media, I’ve even got feedback from my old club on the West Coast, Seattle Sounders. I’m glad that the demand for another camp is so high.

Jungkind: That’s very promising. FC Barcelona, Real Madrid and Paris Saint-Germain have also offered to have camps in the region.

DFB.de: Mr Nouri, you personally continue to educate yourself. Most recently, you participated in the DFB’s Elite Head Coach Training in Spain. How important is it for you to always gain new knowledge?

Nouri: I’m just trying to be open to different influences and learn from them. In the end, it’s about constantly evolving to become a better coach, a better manager, and a better person. The experiences I got from being a pro, working with children in Germany, and the internships at Athletic Bilbao and Villarreal FC all combined and were all incorporated into the idea of the camp.

DFB.de: What can you take from working in the USA?

Nouri: It was exciting to work outside of my comfort zone in a different language and in a different cultural environment. We had a great coaching team with a variety of training, coaching experience and ethnic backgrounds. It was inspiring and there was a great togetherness. This was true to the idea of learning from one another. The same went for the kids. They inspired me with their willingness to learn and great training mentality. Furthermore, we got a very good insight into the massive youth potential of US Soccer.

DFB.de: Mr Jungkind, what have been the highlights so far with what the DFB has implemented in the USA?

Jungkind: The various training programs in the USA add value for our DFB coaches. We can learn from US professional sports, whether that’s basketball, baseball, football, or soccer – we can get new insights. Our findings flow back into the DFB Academy and therefore into German football. Also, there’s an openness to innovation and technology in US Sports. The DFB Academy is involved here, too, be that in game analysis or through measuring elite athletes.