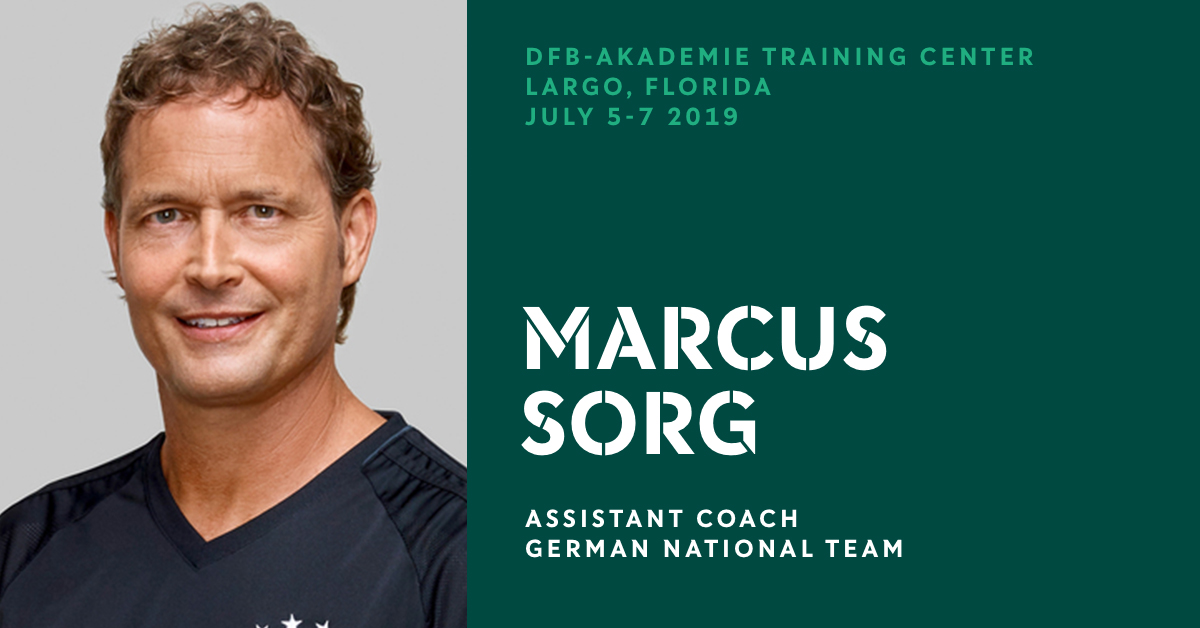 The Assistant Coach of the German National Team, Marcus Sorg, will join us at the DFB-Akademie Training Center in Largo, Florida. He will train the U6-U19 players and the coaches as part of their Coaching Certificate. What a unique opportunity and experience for kids and coaches this is!

On July 31 2014 Marcus Sorg wins the UEFA European Championship in Budapest as head coach with his German U19 National Team. Shortly after, he joins the coaching team of Joachim Löw, head coach of the German National Team, who won the 2014 World Cup in Brazil that same year. In addition to his expertise as a 1. Bundesliga head coach he has now gained 5 years of invaluable experience as a German National Team coach.

At the age of 33 Marcus Sorg starts his coaching career. First at Stuttgarter Kickers, later at TSF Ditzingen, Heidenheimer SB, and SSV Ulm. In the meantime, Sorg is doing his A-level trainer license at the German Football Association (DFB) and is an intern at Diego Maradona’s home club Argentinos Juniors in Buenos Aires.

In 2008 he joins SC Freiburg. Marcus takes over Freiburg’s U17 as head coach. Six months later he already moves up to the U23, which he leads as head coach to avoid relegation in the Regionalliga. This qualifies him for the next step: On July 1st 2011, the graduated civil engineer becomes head coach of the first team in the 1. Bundesliga.

In the summer of 2012, he moves to Bayern Munich’s U17. A season later he takes over the German U19 National Team as head coach. With this team Marcus Sorg will be European Champion on July 31, 2014 in Budapest. Since then, Marcus Sorg has been working in the coaching team of Joachim Löw together with Thomas Schneider as assistant to the German National Coach.